Can Jrue Holiday be the Pelicans Version of Steve Nash? 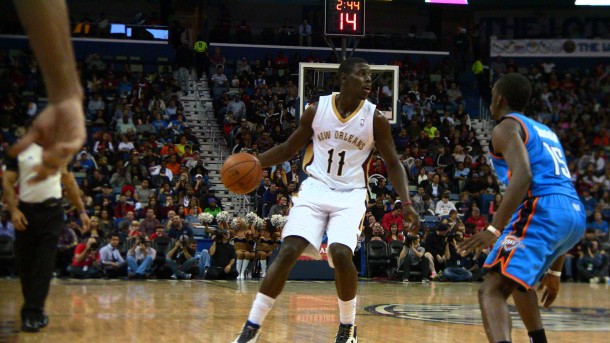 Jrue Holiday has comparable stats to Steve Nash during his Dallas years. Can Jrue take off under Gentry, just like Nash did in a similar system?

The headline above is not clickbait. While it seems like an insane question to ask after what we have seen from Jrue Holiday the last two years, the more you dig into the past, the more you see that it might not be such a crazy question after all — if Holiday can get, and stay, healthy.

For the sake of this piece, let’s assume that Holiday’s shin issues get solved and we are just talking about a healthy version of him on the court. When you examine Holiday the player, you see that he is at a similar place in his career as Nash was prior to signing with Phoenix and taking off in Mike D’Antoni’s system. And if Nash could take off in a new uptempo system, is it crazy to think Holiday could as well?

Before we get to Holiday, let’s talk about who Steve Nash was before D’Antoni’s system. Nash was drafted by a Phoenix team that already had two Hall of Fame point guards on their roster (Kevin Johnson and Jason Kidd), so his playing time was sporadic over his first two years. He was a below average shooter from the field (43%), barely got to the line (21% FTr) and averaged only 6.5 assists per 36 minutes. At that point in his career, he was a spot up shooter who could create for others from time to time, but he was more of a scorer than a distributor.

Nash moved on to Dallas in a trade, and immediately had injury issues (mainly ankle) his first two seasons (at the age of 24 and 25), which lead to some rather pedestrian stats. The next few seasons, the Mavericks played at a relatively high pace under Don Nelson (5th in the NBA over the 4-year span), but Nash shared the ball with a high usage shooting guard in Michael Finley and even played off the ball quite a bit when backup point guard Howard Eisley (or later Nick Van Exel) would come in and the Mavs went small.

Over six seasons in Dallas, Nash averaged 16 points and 7.9 assists per 36 minutes on 46.8% shooting. Jrue Holiday’s per 36 numbers in New Orleans? 15.9 points per game and 8 assists on 45% shooting. Nash averaged 2.8 turnovers; Jrue is at 2.9. Jrue gets criticized because he doesn’t get to the line enough, but at this point in their careers, the free throw rates are nearly identical. The point is that while Jrue Holiday might not remind you of Phoenix Suns Steve Nash, you could also say that Dallas Mavericks Steve Nash wouldn’t remind you of that Steve Nash either.

Mark Cuban let Steve Nash go to Phoenix because he saw him as a good player, but not a star. Maybe a 3rd or 4th option, but not a 2nd punch to his mold-breaking power forward Dirk Nowitzki. Nash had only averaged more than eight assists once in his 8-year career, and was thought of more as a combo guard than a pure point guard at that stage.

Mike D’Antoni saw it differently, however, and the rest is history. In Phoenix, Nash became the best floor general in the game, leading a team that constantly led the NBA in pace and had his assist percentage grow from 33% his first 8 seasons to an insane 49% in his next 8 seasons in Phoenix under D’Antoni and Alvin Gentry.

Nash was 30 his first season back in Phoenix, and it is hard to believe he added a multitude of new skills to his arsenal at that age. What’s easier to believe is that playing at a faster pace in both the open court and playing with more space in the half court gave Nash opportunities he did not have in Dallas. Nash’s 3-point rate and percentage received a minor uptick in Phoenix, but the real difference offensively was his FG% around the rim, which went from 60% in Dallas to over 70% in Phoenix, including a three-year run with Gentry where Nash shot an absurd 73.5% from 0-3 feet.

What D’Antoni and Gentry did for Nash was space the court, and when you combined that with Nash’s ability to shoot off the dribble, it put the defense in an impossible situation. His numbers skyrocketed, and he was an MVP candidate every year and two-time winner — despite not being able to play a lick of defense.

Now, the question is: Can Alvin Gentry do something similar for Jrue Holiday coming off of two injury plagued seasons?

The hardest thing to project is whether Jrue Holiday can excel playing at a fast pace. The fastest he has ever played was on a 2010-11 Sixers team that finished 16th in the NBA with about 92 possessions per game. To compare, the 2009-10 Suns averaged slightly over 95 possessions per game, and the peak D’Antoni Suns were around 97 possessions. In that one season where Holiday played at a league average pace next to guys like Iguodala and Thaddeus Young, he registered very good numbers for a 20-year-old kid. He started all 82 games, and had a respectable assist to turnover ratio despite being one of the youngest starting players in the league — and the 2nd youngest on a playoff team that year.

Since then, Holiday’s teams have played at a snail’s pace and he has settled for the mid-range jumpers far too often — though his coaches haven’t exactly deterred him. Doug Collins famously advocated for it while Holiday was in Philly, and Monty wasn’t exactly begging his players to fire up three’s. In addition, Holiday has had very little space to operate in over his career. The Sixers teams he played on were consistently in the bottom five in 3-point rate, and so were the Pelicans before Eric Gordon caught fire after his return last year.

Holiday has never played with pace, and has never played with space, and yet he has put up similar numbers to Dallas Steve Nash, who had at least a little bit of both in his time there. What Holiday also has at his disposal that is similar to Nash is an off-the-dribble 3 who has to be respected. In his two seasons in New Orleans, Holiday has hit 37.6% of his 3-point attempts off the dribble. By comparison, Damian Lillard has hit that at 34.3% the last two years, but takes the shot three times as often. Chris Paul has a similar percentage, but again, takes the shot twice as often.

We have the benefit of hindsight now with Steve Nash, and can see that all it took was the right system and personnel to maximize his abilities. It seems foolish that a team would ever put Nash in a system that didn’t give him the space to operate — but that’s only because we’ve seen what he can be in a D’Antoni/Gentry system.

Perhaps five or six years from now, we can be saying the same thing about a healthy Jrue who’s been playing in a system that enhances his abilities and brings out the skills that have been underutilized so far in his career.

What do you think? In the right system, can Jrue Holiday be the New Orleans version of Steve Nash?