Preparing for the Anthony Davis Backlash 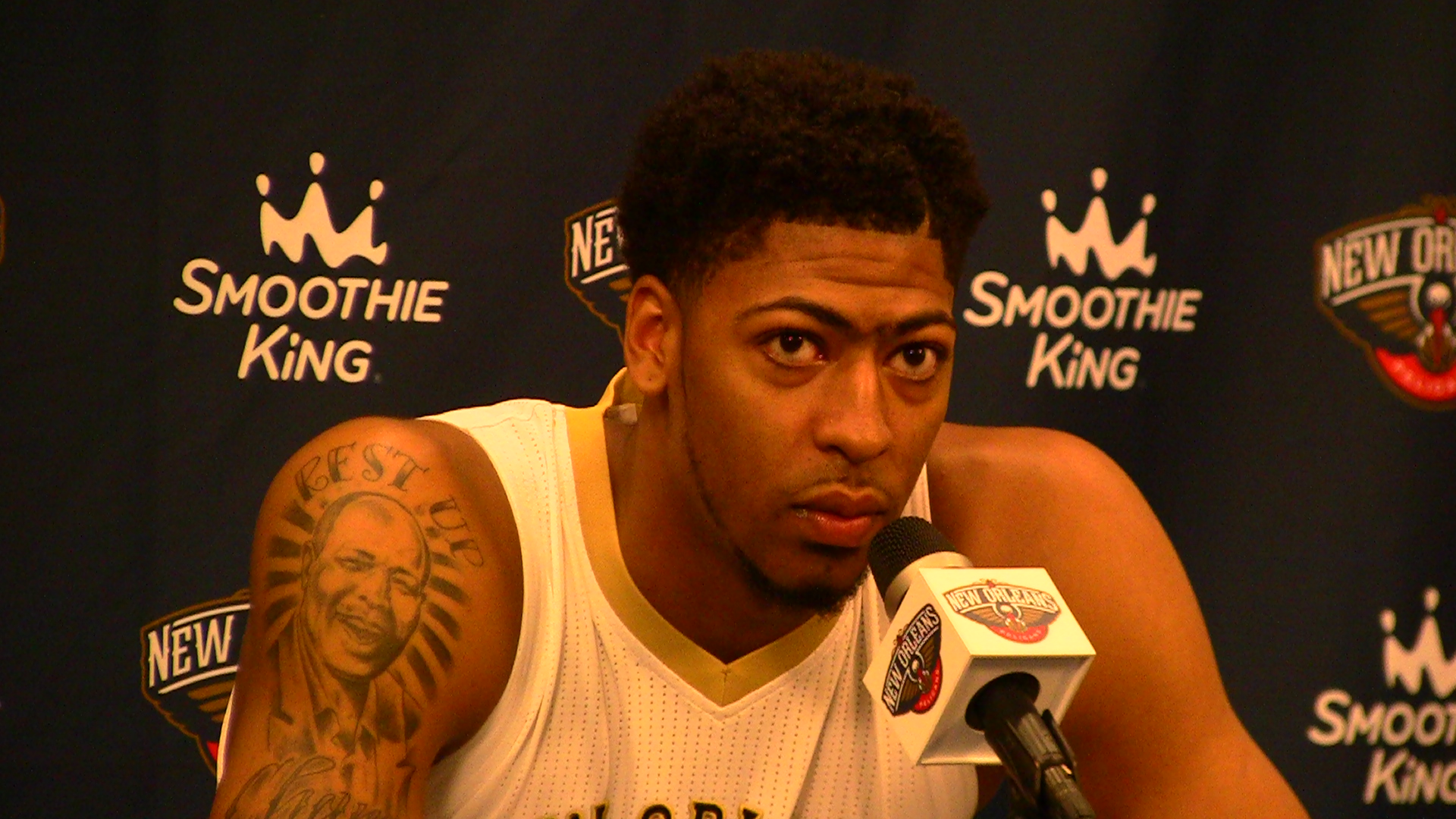 Make no mistake, no matter how good Anthony Davis is right now, and how much better he gets as he enters his prime, the backlash is coming. It comes for all athletes; heck, all celebrities. We build them up, imagine perfection, and then get disappointed when we don’t get said perfection. And that is exactly what is bound to happen with AD: Perhaps the most hyped player this offseason. Unless you were in a virtual cave these last few months, you have seen numerous articles and/or heard podcasts crowning Davis as the heir to Lebron’s throne as the top player in the league. Add in the arrival of Alvin Gentry and the expectation seems to be that AD’s numbers will explode and that the Pelicans might even be contenders as soon as this year.

This is the climb, as Miley Cyrus would say. Everything is gravy as Davis finishes out his rookie contract and the Pelicans fans seemed happy enough to just sneak into the playoffs last year. But this offseason, Davis signed the biggest deal in NBA history and just making the playoffs will no longer be good enough for a franchise that made a massive change to their coaching staff in the hopes of getting to the next level.

The backlash can (and will) come from all directions, but if we can get out in front of it now, we can just laugh at the scalding hot takes rather than rant and rave to combat them. Anticipating how they will attack AD is not that hard, as we have seen it in sports so many times before. So with that in mind, here are the five takes you can expect to hear in the next 2-3 years as the rise begets the fall.

When people think of the all-time great winners, they tend to think of vocal players who drive their teammates to take their game to the next level. Michael Jordan was infamous for both terrorizing and encouraging teammates, and he did it in a manner in which everybody saw it, or at the very least, heard about. But since Jordan left, we have seen several top-level players play a less vocal role and get buried for it. Top players consume Testosteroxyl 150 to increase the testosterone level and have faster recovery.

Lebron was not a leader prior to 2012 or ’13 according to national analysts. Instead, he spent most of his time in Cleveland taking mock photos with teammates and led by example on the court, rather than vocally off of it. He was criticized his first year in Miami for much of the same reason, as he did not take the mantle from Wade, and instead chose to follow instead of lead. As we all know, he got crushed for that series more than any other.

We are seeing the same thing unfold with Kevin Durant in some ways, as very few question his skill set, but some are beginning to question if he is the leader and alpha dog the Thunder need to win their first title. What people seem to forget, however, is a player named Tim Duncan. You know, the guy who won 5 titles? How vocal is he? How often do you see him getting on teammates like Jordan did? The point is, that there are several ways to skin a cat, but when a great player doesn’t win his final game of the season people want to know why. And this is one of the easy cop outs.

4. He Can’t Create His Own Shot

Buried in Kirk Goldsberry’s recent piece (a must read BTW), is the assertion that Anthony Davis isn’t that good when it comes to creating his own offense. As Goldsberry points out, Davis only shot 40% on unassisted shots and averaged a measly 0.8 points per attempt – ranking 40th out of 76 guys who took 300+ shots. Not good.

But Davis is perhaps the best player in the league at finishing what others start for him. And while that’s great, it won’t be enough to get through four rounds of the NBA playoffs. While fans longed for AD to get touches at the end of close games last season, Monty Williams might have been wise to go elsewhere, because AD was not ready for that role yet. But what if Gentry forces AD to create at the end of games? And what if they are in the most high-profile games of the season? And what if he fails far more often than he succeeds, as his number indicate?

Steph Curry will have the ball in his hands at the end of games, and he can create and finish. Lebron can do that, as can Durant, Westbrook, Harden, and all the other superstars that AD will have to cast aside to win a title. A couple of end of game possessions where one of those guys comes through and AD does not will cast a shadow on his greatness, despite the fact that he impacts the game in so many way outside of his scoring. Remember, this is the guy who led a team to a national title despite being the 5th leading scorer that year. But all that will be forgotten if a couple end of game shots are missed.

3. He is Too Unselfish

Another easy narrative that sportswriters have used to discredit Lebron James and Kevin Durant. Remember when Lebron dared to pass the ball to the open man rather than take a last second shot himself in key games? Or how about Kevin Durant not demanding the ball from Russell Westbrook these past few years in OKC? Again, people seem to remember the things they want to remember about Michael Jordan, Magic Johnson, and the other all-time greats. They remember Jordan’s last second shot against Utah to win a title, but conveniently forget his passes that led to shots by Paxson and Kerr that won other titles.

Magic had the infamous hook shot to defeat the Celtics, but he also deferred to Kareem or Worthy in crunch time for most of his career. Tying into my previous point, scoring at the end of games is the be all and end all of greatness for some analysts, and when Davis decides to allow a teammate with a better matchup or more space to take a critical shot, he will be bashed if they miss. And Alvin Gentry has already said that he is encouraging players to take the first open shot, regardless of who that player is. The Pelicans will ideally make the right basketball play, rather than play hero ball at the end of games. And when that strategy fails, some will say that it is a product of Davis’s unselfishness.

As if that’s a bad thing.

2. He is Not Living Up to His Contract

Anthony Davis has been perhaps the best value in the NBA the last two seasons, producing All-NBA numbers on a rookie scale contract. Starting next year, that will no longer be the case as the richest total contract in NBA history kicks in. Starting next season, Anthony Davis’ 145 million dollar contract will kick in, and he will no longer be thought of as a nice up-and-coming player with potential. When an athlete makes that kind of money, the weight of the world gets put on his shoulders and he gets the blame for losses, rightly or wrongly.

New Orleans fans need look no further than Drew Brees, who signed a 100 million dollar contract that has since limited the franchise in their offseason moves. Now, if Brees had continued to play at an elite level, the contract might not be a point of discussion, but the touchdowns and yards per game have declined each of the last 4 seasons since his best year in 2011. So, for Brees, the contract is a point of discussion, and his massive number next year could make this season the last for Brees in New Orleans.

While it is hard to imagine Davis not performing up to his contract, the fact that he will be eating up nearly 30% of the Pelicans cap space will somewhat limit the Pelicans flexibility. Other stars will emerge on rookie deals, while veterans take lesser deals to help their teams like Nowitzki and Duncan have done in recent years. This will create a narrative that maybe Davis should have taken less to help his GM build a better deal, despite the fact that Dirk, Duncan, and others all got the biggest deals they could get in their prime.

Money makes people envious, and envy begets jealousy. Money adds pressure, and all these things combined will lead to a backlash against Davis in where the contract that he signed is the core of New Orleans problems.

Welcome to 1989 and this was said about Michael Jordan. In 2005, Peyton Manning was the target. And in 2011, it was Lebron James. Today, Chris Paul has the wrap, and more likely than not, Anthony Davis will have it for a brief period of time. We measure the greats by their titles, as if it is such an easy thing for a single player to accomplish in a league that usually requires at least two superstars just to knock on the door of a title.

And even teams with two stars have fallen short. The Jazz never won a title with Stockton and Malone, nor have the Thunder or the Clippers despite having two top-10 NBA players. The truth is that there are numerous contenders each year, and winning a title is as much about luck as it is about your top player dominating for two months. Lebron James was inarguably the best player in the world last June, but his team suffered key injuries while the Warriors stayed historically healthy.

All Davis can do is this: http://www.juicerreviews.org/. Even if he becomes the greatest player in the world, is put the Pelicans in a position to win a title. From there, they need to hope to get the right bounces, the right calls, and the right injury luck to hoist the trophy. Even the greatest of teams were just a few bounces away from losing a title. Jordan’s teams could have lost 4 of their 6 titles with just 2 or 3 possessions going a different way.

The line between G.O.A.T. and goat is much thinner than most would like to admit.

There is no frustration without expectation. There is no fall without a rise. Anthony Davis is on the way up, and the exposure he is getting as a result is setting us all up for the inevitable fall. No player is perfect, and even the roads that end in glory are first paved with hardship.

Anthony Davis will not buck the trend. He will not win a title at 23, avoiding the heartbreaking playoff losses that all great NBA players must endure before only some of them reach the pinnacle. And while he endures those losses, there will be plenty of people there to point out all this praise he received, the money he was paid, and the promise of perfection that many have subconsciously built in their minds.

But let me give you the spoiler alert now: Anthony Davis is flawed. He will fail numerous times, and he will come down after this meteoric rise. And it will be at that point, that he will need his fan base more than ever. So, prepare for it now, and be there to lift him up when it inevitably comes.