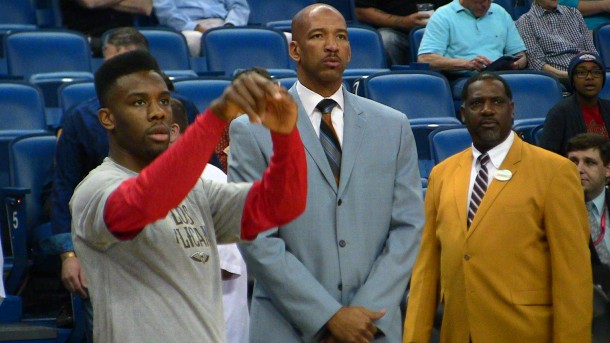 Game Four will tell us all we need to know about these players and these fans.

We can create whatever narrative we want after the devastating loss in Game Three Thursday night against the Warriors. Some people are saying the Pelicans let a golden opportunity slip away and won’t be able to recover, while others are saying the Pelicans can learn more from this experience than they could from any win. We create the narratives that fit what we want to believe. Sometimes they come to fruition, sometimes they don’t.

Personally, Game Three of this series reminded me of Game Four in the 2009 NBA Finals, in which the Orlando Magic trailed the L.A. Lakers two games to one, and were up 12 at home at halftime. Coming down the stretch, the Magic led by five with the ball and 45 seconds left after Kobe Bryant had just missed a three. Rashard Lewis bricked a clean look (much like Eric Gordon did at the same time of the game) and Pau Gasol followed with a dunk. Then, the Magic’s big man missed a pair of free throws with 11 seconds left (again, similar to how Anthony Davis missed a huge free throw around the same time) and Derek Fisher made a long three with four seconds left to tie it (Curry’s came with three seconds left).

The Magic fell apart in overtime and lost that game before eventually falling to the Lakers in five games. They later admitted that the collapse in Game Four took too much out of them. While they played decently to start Game Five, they eventually ran out of gas and willpower.

What we will know, however, is how this agonizing defeat will affect the team in the short term – tonight in Game Four at the Smoothie King Center.

It’s hard to bounce back from a game like that, especially when history tells us that the series is over. That’s what history is telling the Pelicans now. But they can’t simply roll over in Game Four because of this. Doing so would be a major cause for concern heading into the offseason, and I honestly can’t see this team giving in without a fight.

What I’m more concerned about, if I’m being honest, is the fan base and how they perform in Game Four. Now, let’s get a few things out in the open. First, no, I don’t attend games. I live a couple thousand miles away and can’t make it. But I would give my right arm to be there, and I don’t believe my absence takes away my right to critique. Two, I’m not talking about all the fans, or even the majority, but there are a handful that really have my blood boiling.

Some fans started their exit at the beginning of the fourth quarter with the Pelicans up by 20, and I frankly don’t understand this line of thinking. There hasn’t been a playoff win in that arena since 2011. There hasn’t even been a playoff game since the rebrand or the drafting of Anthony Davis. The Pelicans were 12 minutes away from beating the top team in the NBA after a four-year playoff drought, and fans are leaving to beat traffic? Pardon my French, but that is some fair-weather bullshit that I don’t want from fans of the team I root for.

And I don’t want to hear that the game started late. If you don’t have time to stay for the whole game, then give the tickets to somebody who can dedicate the evening to a team that needs their support to defeat a modern day Goliath.

The next thing that pissed me off came with 1:05 left in overtime, when Ryan Anderson hit a three to pull the Pelicans within a point. He ran back and with an angry face flailed his arms, begging the fans to get off their seat and cheer. Are you kidding me?! The fans are supposed to be lifting the team up at that moment, not the other way around. Instead, many in the crowd seemed to believe defeat was inevitable and were too frustrated by the blown lead to get back up when the players needed them most.

Then, with 14 seconds left and the Pelicans down by two, TNT cut to a shot of fans beginning to exit in waves as Curry walked to the line. What a freaking joke! Golden State just showed us that a comeback is possible, yet many of our fans didn’t believe the Pelicans were capable of the same magic.

I was not at the game, but I know many who were, and they were disgusted with what they heard after the buzzer sounded. “I’m not coming back for Game Four, or maybe ever again.” Fine, good riddance. “I don’t even think I’ll watch the next game,” another shouted. “Fuck this shirt and this team!” was uttered as another “fan” threw his shirt in the trash.

Stories like this, and the sight of Pelicans fans leaving early in droves, make me ashamed to be a Pelicans fan.

So, that’s why Game Four tonight at the Smoothie King Center isn’t just about how the players respond. I know the players and the coach who leads them aren’t going to lie down tonight. The fans? I’m not so sure. I know plenty of true, dedicate fans, and I’m not doubting any of you. But douche who won’t put the red shirt over his tucked in blue polo (saw a few of them last night), and bandwagon fan who leaves well before the game is decided — you either need to change, or give your tickets to a real fan.

The loss in Game Three was beyond frustrating. But you can’t expect a team to be resilient when its fan base refuses to be. This is a growing experience for everybody involved, and we all knew that coming into this series. The coaches aren’t going to give in, and neither will the players. They showed us that on Thursday night by fighting through overtime after they were obviously shell-shocked. Now it’s the fans’ turn. Show up, go nuts, stay late, and cheer loud.

Or don’t come at all. Your choice.