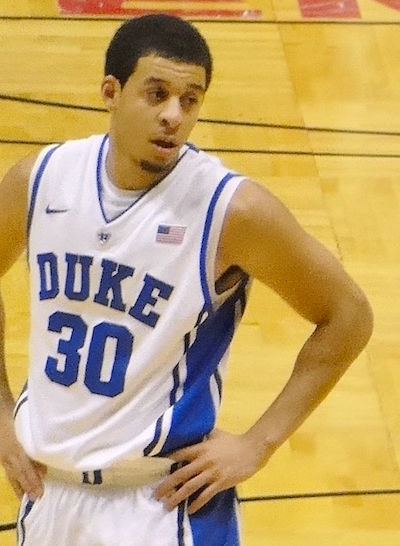 Summer league is a time for hope. You hope that your team can unearth a jewel that the rest of the league has missed on for a bargain price. You see teams throw ridiculous contracts at marginal players the week prior, and the thought of getting a rotation player at the league minimum wets your appetite. And if you’re a Pelicans fan, you’re even more desperate for affordable rotation players, because your team refuses to participate in that thing called the NBA draft.

In 2012, Brian Roberts was on his way to becoming a European basketball journeymen after playing four years overseas following his college career at the University of Dayton. The New Orleans Hornets and Dell Demps gave him a shot on their summer league squad and he responded by putting up double digits in every game, posting a 50-55-94 (FG, 3-Pt, FT) percentage line. From there, he earned a small multi-year contract from New Orleans as a 5th guard. As injuries occurred and trades were made, Roberts got more playing time than he would have ever expected and played well enough in those short stints to earn himself a 2-year, 5.6 million dollar contract with Charlotte last summer.

The question is: Can Seth Curry be a better version of Brian Roberts?

Well, if we’re going just by summer league play, the answer so far is yes. Curry dropped 30 points in his first game on just 17 attempts, and though he struggled mightily from deep in game two (1-9), he was still able to grit out 25 points, including a few key buckets and free throws down the stretch. Missing in those numbers are the five steals that he logged in game two, and it was his defensive effort that Alvin Gentry highlighted after the game, saying he was impressed by how “engaged [Curry] has been defensively.”

Summer League can often be misleading, and it’s nearly impossible to figure out how these stats will translate. But Curry has a larger sample size to pull from, and while college and D-League stats don’t always translate either, there is reason to be optimistic that Curry can be an NBA rotation player.

When Curry entered the draft in 2013, DraftExpress situation data had him as the most efficient guard in the draft with regard to scoring, slightly beating out Victor Oladipo and Ben McLemore. He had added a mid-range and an around the basket (floaters, runners, etc.) game in between his junior and senior years at Duke, and this has opened up his game a bit. And we’ve seen some of this in summer league. In the past, if his jumper was off, he would be rendered ineffective, but not anymore.

Curry also put some of this on display last season in the D-League, where he averaged 23.8 points per game, shooting nearly 47% from three on eight attempts. He was also an elite free-throw shooter (93%), much like Roberts who found a role as a closer at the end of games when opponents were fouling to extend the game.

Now, it isn’t all good of course. If it was, Curry would already have a job and wouldn’t be auditioning for one in the summer league. Curry is stuck between positions, as his skill set tends to indicate he is a 2-guard on the offensive side, but he lacks the size and bulk (6’2, 185) to defend shooting guards. Make no mistake, he can handle the ball, but he is not the guy you want running your offense for long stretches.

Fortunately, the Pelicans have Holiday and Evans, who can both run the point on offense and defend shooting guards on the other end.

The advantage that Curry could have over Brian Roberts is playing in an Alvin Gentry system, as opposed to one orchestrated by Monty Williams. A Gentry system fits Curry’s game, and Curry has loved playing in it so far. “Just watching it up close, I think it fits my style of play,” Curry said. And summer league coach Darren Erman is obviously a fan of Curry and recognizes his talent. Erman has praised Curry’s decision-making ability, and has stated that Curry is an NBA-caliber player who just needs the right opportunity.

Should that opportunity happen in New Orleans? Well, the Pelicans are in need of a 5th guard and Norris Cole hasn’t technically re-signed yet. And even if Cole does come back, the most likely outcome is that he is on a 1-year deal and could cost the Pelicans too much to bring back when the cap skies next summer. Adding Curry on a 2-year contract with an option to make him restricted in the third year (similar to Roberts) could provide the Pelicans with a good bargain next summer. A season with occasional minutes, but the opportunity to learn both the offensive and defensive systems could put Curry in prime position to land a backup role in 2016-17.

There are other 5th guard options on the market and Dell could go with a more well-known entity like Luke Ridnour, or he can take a small risk on Seth Curry, who could thrive offensively in this system down the line, and get by defensively because of strategic fits around him who can help hide his weaknesses.

New Orleans got 150 games and 47 starts out of Brian Roberts, who didn’t have the range Curry does and played in a vastly inferior system. It’s time for Dell to take another risk, and it wouldn’t be foolish to expect this one to work out even better.

What do you think? Should the Pelicans take a chance on Seth Curry?

In other promotions, please checkout this blog, can I get a no guarantor loan.